I love groundhogs.  I also love edamame.  The problem comes from the fact that groundhogs also love edamame, but they don’t really give a fig about me or my eating habits.  Hence, we come to the problem we are wrestling with: Chunky Chuck, the groundhog who has been living near our gardens for months and being a perfectly acceptable neighbor, turned into a ravenous little piggy once the edamame plants sprouted.  So our edamame crop, which used to look like this:

So Chunky Chuck has to go.  L’Homme bought a catch-and-release trap and has been trying to catch the little bugger for a couple of weeks now.  We haven’t had any luck; instead, we get little guys like these in the trap:

Wrongly convicted–don’t worry, they were released as soon as the DNA evidence exonerated them.

L’Homme’s next strategy is to visit with a local trapper, who says he uses a bait that will definitely entice Chuck into that trap.  He calls it Groundhog Cocaine.  After 2 weeks of trying to catch the sucker, I have my doubts, but it will be fun to see just what Groundhog Cocaine might be.

Anybody have any luck trapping and relocating a groundhog? 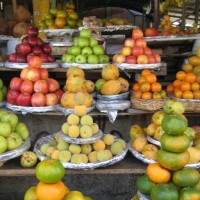